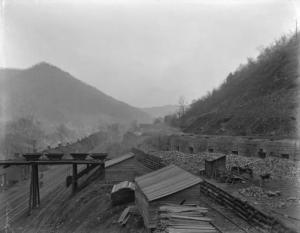 I’m an avid reader of Laurie Ruettimann’s blog Punk Rock HR. She talks about the workplace from both sides of the fence (the HR/management world and the employee’s cubisphere) and does so in a really refreshing, BS-free way.  (She also has great taste in music and blogs about cats and bacon, but I digress.)

A few months ago, when the West Virginia mining disaster happened, she talked about it in her blog, and I made a comment or two on that post. I mentioned that I’d had at least one relative who worked in the coal mines of western Pennsylvania. I knew several more had worked in the steel mills – not just generations ago, but in my father’s generation and also in mine.

In the time since Laurie made that post, I’ve immersed myself in researching my family tree. And wow, did I ever underestimate the head count on family members of mine working in the mines and mills.

Of course, in the late 1800s and early 1900s, mining and mill work was a huge sector of our economy, so it completely makes sense that so many of my ancestors would have been in this line of work.

I found this information in my research, though, and it blows my mind. It also has forever changed my perspective on what constitutes a “bad day at work” or a “bad job.”  It’s an obituary for an ancestor of mine and was published in the Daily Courier, a newspaper in Connellsville, Pennsylvania, on March 4, 1913.

Lewis Daniel Cobaugh, youngest son of the late Charles P. Cobaugh, the veteran Baltimore & Ohio engineer, and Rebella Parks Cobaugh, was almost instantly killed about noon yesterday at the Western Maryland railroad coaling station at Rockwood. The cable on the hoist used in lifting the coal to the chutes parted, and a bucket containing a ton or more of coal descended, and pinned the unfortunate man between the timbers and the bucket, crushing him in a horrible manner. The remains were taken to a local undertaking establishment and prepared for burial, and later were taken to the home of his mother.

The deceased is survived by his aged mother, who for the past year or more has been rendered almost helpless by reason of a stroke of apoplexy. His widow, who was Miss Ella Williams, and two children, Grace and Annabel, age six and three years respectively, survive. He is also survived by one brother and three sisters.

About 22 years ago the father of the deceased, the old engineer, “Dad” Cobaugh, as he was so familiarly known, was blown up in a locomotive explosion, and the injuries received resulted in his death. Prior to death of the father, the oldest son, William, while making a coupling in the Rockwood yards, had his head crushed by projecting rails on two loaded hot cars, dying in a few weeks after that accident. Next, Charles, a younger son, while working in the B. & O. shops at Connellsville, was stricken with malignant typhoid fever, expiring in a few weeks. A few years ago, another son, a flagman on the B & O, was pinioned by a sideswipe wreck in his caboose, directly alongside of a demolished engine, and was scalded to death.

I’m not sure what to be sad or shocked about more. The way Lewis died? The fact that he left two little girls behind? Or the fact that nearly everyone in his immediate family tried to do honorable work and paid for it with their lives?

I’d been planning a post here to talk about my ambivalence towards labor unions – at least, some of the unions in existence today. I’ve had bad experiences with some of them in my own career, and in Chicago, unions get in the way of employees and their well-being more often than they help.

But we’re living during a time when we turn on the TV and see the horrifying BP mess every night. And that drives home a message that corporations don’t, as a default setting, put people first. I’m reminded why unions came to be in the first place, and why safety and security have to be part of any workplace.

And the next time I’m having a bad Monday morning, with an inbox full of mail and a dull nagging headache, I’m going to think of these guys, and be damn glad I’ve got a job – and a safe one.